In 2009 the Dutch King Willem Alexander and Queen Maxima had a villa built in Mozambique. The Dutch government decided to sell this villa because the Dutch people said their King and Queen shouldn’t be allowed to have a luxury villa in a country where the inhabitants are so poor.

This illustrates how the people of the Netherlands can influence events, but what does it mean when it is not a solution to child-labour, poverty or deforestation? Elsard a man from the Netherlands and Ingrid a lady from South Africa were confronted with this contradiction and started activities to find a solution.

Ingrid is the daughter of a forester from South Africa and Elsard has a passion for reforestation. Ingrid knew as a diving instructor the southern part of Mozambique and she grew up surrounded by nature in South Africa. Elsard had visited plantations in Brazil, some of them very special and Elsard is chairman of renaturefoundation.nl   Research led them to Syntropic Farming that fits perfectly in Mozambique.

They started in Mozambique in 2014 by planting Moringa Oleifera trees. This was not the solution to create an earning model, to stop over fishing the lakes and cut down trees. In 2016 after an intensive search they started to study Syntropic Farming and got a collaboration with the University ISET-One World. They see a serious sustainable solution in Agroforestry models where regenerative agriculture is combined with reforestation. Trials and planting at the University convinced all parties involved.

This province is situated between Maputo and the South African border. It is only a small stretch of the Mozambican coast which is  2600 kilometres long! The roads were mainly dirt roads that require a 4-wheel drive car. The Chinese finished recently a road that connects the southern border with Maputo. Malaria is under control and the area is safe for tourism. An important part of the area is the ‘Maputo Elephant Park’. The Peace Park Foundation created there a corridor with the ‘Tembe Elephant Park’ in South Africa.

Give out trees in Goba 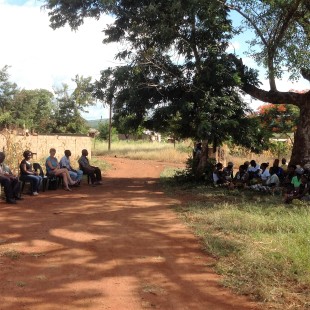 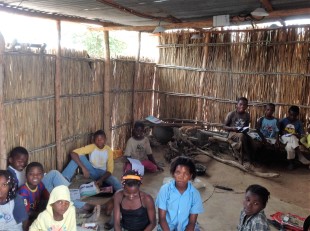 Ingrid and Elsard: “The most important thing we found out is that the majority of the young people give us hope, a lot of hope. Not only the students at ISET or Namaacha but all the young people. A lot of them speak English. They are polite, modest and prepared to work in the rural areas. Some of them teach the children in order to give them a better future. They are the driving force motivating us to go on.”